This feature is currently in beta.

Users with the Read roles have a slightly different version of the Blitapp UI available to them: all buttons to create, update or delete resources (captures, Apps, etc.) are removed. For example, the left menu is missing the button New Capture: 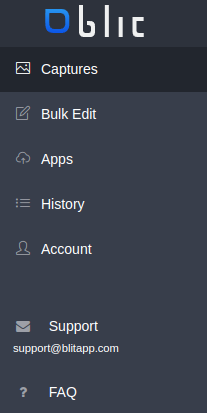 Users with the View-only role have access to the capture history, the definition of captures, and Apps, as well as the current team plan, the list of team members, and their roles.

Unlike Create, this lets the user update or delete apps and captures created by other members.

This role allows the user to modify or cancel the team Blitapp plan and view the transaction PDF receipts.

The Admin role gives full access to Blitapp. Currently, there can be only 1 Admin per team.

Every user not part of a team is an Admin.